Home » Bookkeeping 101 » Why LIFO Is Banned Under IFRS 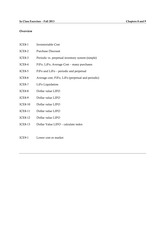 LIFO isn’t a terribly realistic inventory system and can be difficult to maintain. LIFO also isn’t a great idea if the business plans to expand internationally; many international accounting standards don’t allow LIFO valuation. Choosing an inventory method for a company is more than an accounting formality. Settling on either LIFO or FIFO as an inventory valuation method can affect the appearance of a company’s income, strategic planning and tax liability.

LIFO is more difficult to maintain than FIFO because it can result in older inventory never being shipped or sold. LIFO also results in more complex records and accounting practices because the unsold inventory costs do not leave the accounting system. LIFO is not recommended if you have perishable products, since they may expire on the shelf before they are sold or shipped.

The other main method used in business is “first in, first out,” or FIFO. When a company liquidates some of its inventory, the method it uses for handling its inventory has an impact on profit and taxes.

It is a method used for cost flow assumption purposes in the cost of goods sold calculation. The LIFO method assumes that the most recent products added to a company’s inventory have been sold first.

LIFO users will report higher cost of goods sold, and hence, less taxable income than if they used FIFO in inflationary times. Imagine a firm replenishing its inventory stock with new items that cost more than the old inventory. When it comes time to calculate cost of goods sold, should the company average its costs across all inventory? This decision is critical and will affect a company’s gross margin, net income, and taxes, as well as future inventory valuations.

Most companies try to sell their oldest inventory first to reduce the risk of obsolescence and spoilage, so costs are generally more accurate. During times of inflation, FIFO has the effect of increasing the value of remaining inventory and increasing net income. Showing large assets and income can help a company that’s trying to lure in potential investors and lenders.

Then, for internal purposes – such as in the case of investor reporting – the same company can use the FIFO method of inventory accounting, which reports lower costs and higher margins. FIFO may not show an accurate depiction of costs when material prices rapidly increase. If material prices triple but accountants are using costs from months or years back, managers may not pick up on cost issues as quickly.

What Is a LIFO Liquidation?

What is LIFO Last In First Out?

LIFO liquidation refers to the practice of selling or issuing of older merchandise stock or materials in a company’s inventory. Therefore, the old inventory costs remain on the inventory valuation method. The liquidation occurs when a company using LIFO sells more goods or issues more old stock than it buys.

Congress has threatened to outlaw the method as the Internal Revenue Service introduces laws and requirements that make using the LIFO method inconvenient at best. Using the LIFO method of inventory means that when you count the cost of goods sold, you use the current price rather than whatever price you paid for the specific inventory in stock. If the prices of those goods go up from your initial purchase, your cost of goods sold will read higher, thereby reducing your profits and, as a result, your tax burden and access to credit. LIFO, on the other hand, leads us to believe that companies want to sell their newest inventory, even if they still have old stock sitting around. LIFO’s a very American answer to the problem of inventory valuation, because in times of rising prices, it can lower a firm’s taxes.

The LIFO method is a financial practice in which a company sells the most recent inventory purchased first. Some companies use the LIFO method during periods of inflation when the cost to purchase inventory increases over time.

This is because the LIFO method is not actually linked to the tracking of physical inventory, just inventory totals. So technically a business can sell older products but use the recent prices of acquiring or manufacturing them in the COGS (Cost Of Goods Sold) equation. Under LIFO, a business records its newest products and inventory as the first items sold. The opposite method is FIFO, where the oldest inventory is recorded as the first sold. While the business may not be literally selling the newest or oldest inventory, it uses this assumption for cost accounting purposes.

Companies that hold inventory must have a structured way of managing it. When the production or sales departments need material from inventory, they can either take it from the most recently purchased supply, or from the supply that has been in inventory the longest. The LIFO method stands for “last in, first out,” and takes the most recently purchased or “last in” material first, as needed.

The best method for a business depends on its goals and current financial position. The “Last In, First Out” inventory method has been hotly debated at the federal level.

If the cost of buying inventory were the same every year, it would make no difference whether a business used the LIFO or the FIFO methods. But costs do change because, for many products, the price rises every year. You’ve probably heard of them, as their abbreviations sound vaguely like names of dogs. First-in, first-out (FIFO) and last-in, first-out (LIFO) are the methods most public companies use to allocate costs between inventory and cost of goods sold.

Income tax is one of the largest expenses a company incurs, and a reduction can be a substantial financial benefit. Higher taxes from FIFO valuation decrease a company’s cash flows and growth opportunities.

The costs paid for those recent products are the ones used in the calculation. LIFO reserve, often called “excess of FIFO over LIFO”, is the difference of your inventory’s book value under the two assumptions. For you accounting types, the LIFO reserve account is a contra-asset account tied to inventory.

As IFRS rules are based on principles rather than exact guidelines, usage of LIFO is prohibited due to potential distortions it may have on a company’s profitability and financial statements. As well, the LIFO method may not actually represent the true cost a company paid for its product.

LIFO also is not an ideal method for businesses expanding globally because a number of international accounting standards do not allow LIFO valuation. The Last-In-First-Out (LIFO) method of inventory valuation, while permitted under the U.S. Generally Accepted Accounting Principles (GAAP), is prohibited under the International Financial Reporting Standards (IFRS).

The LIFO reserve is the amount by which a company’s taxable income has been deferred, as compared to the FIFO method. This is because when using the LIFO method, a business realizes smaller profits and pays less taxes. The LIFO method goes on the assumption that the most recent products in a company’s inventory have been sold first, and uses those costs in the COGS (Cost of Goods Sold) calculation.

The LIFO reserve is an accounting term that measures the difference between the first in, first out(FIFO) and last in, first out(LIFO) cost of inventory for bookkeeping purposes. In periods of rising prices, constant increases in costs can create a credit balance in the LIFO reserve, which results in reduced inventory costs when reported on the balance sheet. Under FIFO, the oldest inventory cost is used to calculate cost of goods sold.

When Should a Company Use Last in, First Out (LIFO)?

What is LIFO reserve?

Last In, First Out (LIFO) Definition: An accounting method for inventory and cost of sales in which the last items produced or purchased are assumed to be sold first; allows business owner to value inventory at the less expensive cost of the older inventory; typically used during times of high inflation.

The LIFO method provides tax benefits as the higher costs associated with new inventories seemingly offset profits, resulting in a lower tax burden. Companies that use the last in, first out method gain a tax advantage because the method assumes the most recently acquired inventory is what is sold. As inflation continues to rise, LIFO produces a higher cost of goods sold and a lower balance of leftover inventory. The higher cost of goods sold results in a smaller tax liability because of the lower net income due to LIFO.