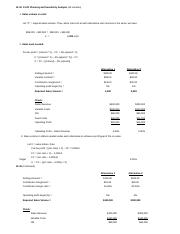 The audience of an organization’s financial reporting includes funders, donors, boards of governors and regulators. These stakeholders are mainly interested in the relationship between a nonprofit organization’s program expenses and its supporting expenses.

From its most recent audited financial statements, advertising and promotions represented over 35 percent of total expenses. Such a high percentage of expenses devoted to advertising is unheard of in for-profit companies, which simply cannot both compete on price and make a profit while carrying such high advertising costs. Yet, it barely registers with donors of the Wounded Warrior Project, who continue to flood the organization with cash. Not reporting fundraising expense – If an organization shows more than an insignificant amount of contributions on the statement of activities, we would expect to see fundraising expense included in the functional expense statement.

The second key feature of the argument to unleash more nonprofit advertising is that the reason advertising is currently limited is an unproductive obsession with reducing accounting overhead. The idea is that accounting rules treat all expenses incurred by nonprofits as either program-related or overhead (fundraising and administrative), and many donors and watchdogs fixate on what percentage of expenses are program vs. overhead. Setting aside the question of whether donors pay enough attention to such figures, the presumption by many is that advertising is automatically classified as overhead, so nonprofits are excessively discouraged from undertaking it. The problem with this presumption is that it is not how the accounting rules are typically applied. If an organization’s mission includes a stated desire to raise awareness about an issue or otherwise educate the public, associated costs are classified as program expenses, not overhead.

In addition to disclosing its expenses, your organization will also be required to disclose the method used for allocating expenses among the functional classifications. This information should be included in the footnotes to the financial statements. It should also include a brief disclosure of the major types of expenses that are allocated among programs and the methodology for the allocation, such as square footage or time reporting. Flexible expenses change each month but play a role in the general operations of a nonprofit.

This is accomplished by analyzing the charity’s consolidated or combined audit in conjunction with the tax Form 990 of each related entity. Such “action steps” are typically relayed to potential donors through for-profit professional fundraising companies hired by charities to broadly solicit the public for donations. The “educational” component is often information that is common knowledge, or that could otherwise be distributed to the public using a method far more efficient and targeted than fundraising solicitations. Professional telemarketers, on average, keep two-thirds of the money they raise before the charity receives anything. What this means is that someone donating $50 to charity through a professional fundraiser may have just paid over $30 to be solicited and “learn” that they should buckle their seatbelt.

Charities should visit our Charities FAQ for more information about which audit(s) must be posted in cases where a charity or its parent organization, related organizations, or affiliates publish more than one audit. Administrative expenses are the expenses an organization incurs not directly tied to a specific function such as manufacturing, production, or sales. These expenses are related to the organization as a whole as opposed to an individual department or business unit. Salaries of senior executives and costs associated with general services such as accounting and information technology (IT) are examples of administrative expenses.

The Better Business Bureau mandates that charities spend at least 65 percent of total expenses on program activities. However, other organizations are more complex and publish combined or consolidated audited financial statements that may include a national office, local affiliates, and/or several related organizations. It is generally not enough to analyze and publish a rating based on only one entity of an organization that has multiple, related entities.

This is because some charities use one entity primarily to raise funds and pay overhead costs, then grant funds to another, related entity whose activities include primarily programs. Calculating separate program and fundraising efficiency ratios for the two, related charities would make the fundraising entity appear to be highly inefficient, and the entity conducting the charity’s programs highly efficient. To understand whether or not the resources of a charity are being used efficiently on the whole, the finances of the two related entities must be analyzed together.

Even if your organization does not have a specific grant writer or development director, there is likely someone, such as the executive director, spending time cultivating these donations. Because that time is focused on fundraising activities, a portion of that person’s salary should be allocated to fundraising. However, there are some types of organizations that generally do not have fundraising expenses. These include religious organizations, private foundations, or an entity that has no paid staff where most, or all, contributions arise from uncompensated board members soliciting contributions.

Some non-profit organizations receive large donations of non-cash goods and services, which they are responsible for valuing. The dollar value a charity assigns to its non-cash donations is then mixed together with its cash revenue and expenses in its financial reporting.

Fundraising costs are supporting expenses associated with an organization’s call for financial support or monetary contributions. This would include all expenses related to fundraising events, direct mail campaigns requesting donations and the salaries of employees working on fundraising. Program expenses are any costs related to running the various programs and services offered by a nonprofit organization, as per its mission. Further, if a nonprofit undertakes an activity that includes both an awareness/education and a fundraising component, they are permitted to allocate the associated costs between fundraising and programs (and have substantial leeway in doing so). In other words, the presumption that advertising is treated as overhead is not correct. For each of the largest nonprofits discussed previously, the next chart shows what percentage of their advertising costs are actually classified as overhead. 82 cents of every dollar donated to The Salvation Army goes toward program services. The average charity spends 75 percent of their budget on programs, while the remaining money goes to cover overhead costs like fundraising, Sandra Miniutti, with Charity Navigator, told NBC News.

This often has the effect of making the nonprofit appear to be larger and operating more efficiently than it actually is. Accounting rules offer only very general guidance about how charities are required to value non-cash donations, and different charities often assign very different values to the same items. Such inconsistencies in the reporting make it difficult to compare the financial efficiency of different non-profit organizations.

They want to see how an organization’s supporting costs relate to and drive its programs. Furthermore, when it comes to advertising, some nonprofits are leading the way. Consider, for example, the Wounded Warrior Project, a popular and growing veterans’ charity.

Flexible expenses include rental car fees when attending conferences out of town, hiring temporary help for the office or programs and costs associated with hosting events and fundraisers. While one month may not have any flexible expenses, other months may exceed the fixed expenses to operate and promote the nonprofit organization.

What is a program service?

Program expenses are those expenses incurred in order to deliver specific programs in accordance with the mission of a nonprofit entity. These expenses are distinct from the other main categories of expenses for a nonprofit, which are fundraising expenses and management & administration expenses.