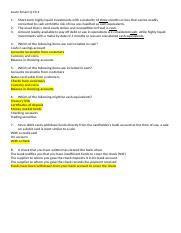 The receivables turnover ratio could be calculated on an annual, quarterly, or monthly basis. Sometimes referred to as A/R, “accounts receivable” is the accounting term used to refer to the money that the business should receive from its customers for the goods or services it provided. 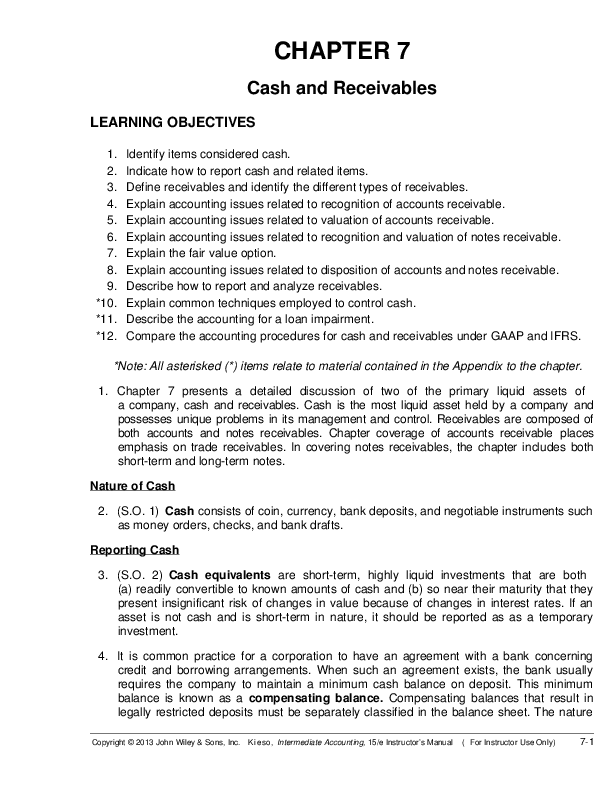 The measurement is usually applied to the entire set of invoices that a company has outstanding at any point in time, rather than to a single invoice. When measured at the individual customer level, the measurement can indicate when a customer is having cash flow troubles, since it will attempt to stretch out the amount of time before it pays invoices. A high receivables turnover ratio can indicate that a company’s collection of accounts receivable is efficient and that the company has a high proportion of quality customers that pay their debts quickly. A high receivables turnover ratio might also indicate that a company operates on a cash basis.

Although this analysis can yield valuable insights, it can also be time consuming, as the process of estimating credit worthiness can become highly complex. There is not an absolute number of accounts receivable days that is considered to represent excellent or poor accounts receivable management, since the figure varies considerably by industry and the underlying payment terms. Generally, a figure of 25% more than the standard terms allowed represents an opportunity for improvement. 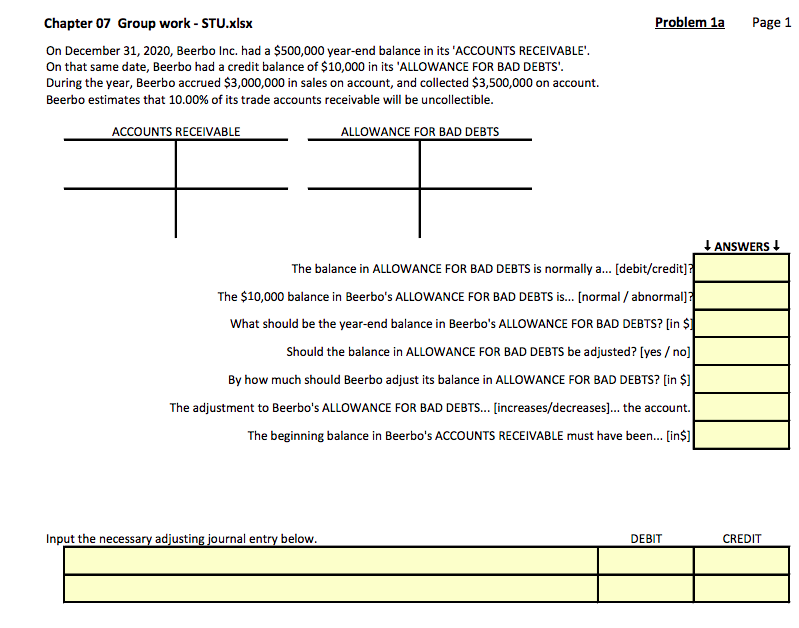 As such, the beginning and ending values selected when calculating the average accounts receivable should be carefully chosen so to accurately reflect the company’s performance. Investors could take an average of accounts receivable from each month during a 12-month period to help smooth out any seasonal gaps. The receivables turnover ratio measures the efficiency with which a company collects on their receivables or the credit it had extended to its customers. The ratio also measures how many times a company’s receivables are converted to cash in a period.

Trade receivables are amounts billed by a business to its customers when it delivers goods or services to them in the ordinary course of business. These billings are typically documented on formal invoices, which are summarized in an accounts receivable aging report. This report is commonly used by the collections staff to collect overdue payments from customers. Sometimes, companies are not able to pay the money they owe for a very long time, or ever.

The company may have gone out of business, maybe their industry is seeing a downturn in demand, or it simply does not have the cash flow. There is an allowance for this on the vendor’s balance sheet with a line amount called “Allowance For Doubtful Accounts”. Companies can calculate the amount a number of ways, but the amount is deducted from the accounts receivable total in the assets section of the balance sheet.

Anyone analyzing the results of a business should compare the ending accounts receivable balance to revenue, and plot this ratio on a trend line. If the ratio is declining over time, it means that the company is having increasing difficulty collecting cash from its customers, which could lead to financial problems. The problem is when accounts receivable reflects money owed by unreliable customers. Customers can default on their payments, forcing the business to accept a loss. In order to account for this risk, businesses base their financial reporting on the assumption that not all of their accounts receivable will be paid by customers.

Accounts receivable (AR) is the balance of money due to a firm for goods or services delivered or used but not yet paid for by customers. When practices are implemented that effectively shorten the healthcare revenue cycle, the impact can be tremendous. By decreasing a payment cycle by only five days, cash flow can increase and hospital accounts receivables can significantly decrease. A trade payable is an amount billed to a company by its suppliers for goods delivered to or services consumed by the company in the ordinary course of business. These billed amounts, if paid on credit, are entered in the accounts payable module of a company’s accounting software, after which they appear in the accounts payable aging report until they are paid.

Under the accrual basis, a merchandising company that extends credit records revenue when it makes a sale because at this time it has earned and realized the revenue. The company has earned the revenue because it has completed the seller’s part of the sales contract by delivering the goods.

Another simple method consists of examining the manner in which the business’s allowance for bad debts has changed over time. This allowance is typically reported in the notes to the financial statements, although it is sometimes included in the balance sheet. If the allowance for bad debts has grown substantially, the business may suffer from a structural deficiency in regard to its ability to collect payments from its customers.

Companies record accounts receivable as assets on their balance sheets since there is a legal obligation for the customer to pay the debt. Furthermore, accounts receivable are current assets, meaning the account balance is due from the debtor in one year or less. If a company has receivables, this means it has made a sale on credit but has yet to collect the money from the purchaser.

This ratio, which consists of the business’s accounts receivable divided by its sales, allows investors to ascertain the degree to which the business’s sales have not yet been paid for by customers at a particular point in time. A higher figure suggests that the business may have difficulty collecting payments from its customers. Accounts receivable days is the number of days that a customer invoice is outstanding before it is collected. The point of the measurement is to determine the effectiveness of a company’s credit and collection efforts in allowing credit to reputable customers, as well as its ability to collect cash from them in a timely manner.

Conversely, an accounts receivable days figure that is very close to the payment terms granted to a customer probably indicates that a company’s credit policy is too tight. When this is the case, a company is potentially turning away sales (and profits) by denying credit to customers who are more likely than not to be able to pay the company. First of all, what would be the days in AR with an arrangement that factors or finances claims to Medicare and commercial payors? Accounts receivable start from the first day of service to a patient upon admission or when outpatient services are rendered, so there is a built-in # of days equivalent to the average length of stay for these patients.

What is the difference between accounts receivable and trade receivables?

Trade receivables are amounts billed by a business to its customers when it delivers goods or services to them in the ordinary course of business. To record a trade receivable, the accounting software creates a debit to the accounts receivable account and a credit to the sales account when you complete an invoice.

At the same time, dramatic declines in the allowance for bad debts may indicate that the business’s management has had to write off portions of their accounts receivable altogether. In previous units, you learned that most companies use the accrual basis of accounting since it better reflects the actual results of the operations of a business.

The accounts receivable turnover ratio measures a company’s effectiveness in collecting its receivables or money owed by clients. The ratio shows how well a company uses and manages the credit it extends to customers and how quickly that short-term debt is collected or being paid.

This means that the accounts receivable balance tends to be larger than the amount of reported revenue in any reporting period, especially if payment terms are for a longer period than the duration of the reporting period. For example, the notes to the financial statements may mention specific customers with outstanding debts. Collect these names and investigate the credit worthiness of each debt-owing customer individually. You can then estimate the likelihood of each customer repaying its portion of the business’s accounts receivable.

What are trade receivables examples?

Accounts receivable are amounts that customers owe a company for goods sold and services rendered on account. The term trade receivables refers to any receivable generated by selling a product or providing a service to a customer. However, customers may sign a sales invoice to acknowledge purchase of goods.

Accounts receivable, or receivables represent a line of credit extended by a company and normally have terms that require payments due within a relatively short time period. Trade receivables are recognised initially at fair value and subsequently measured at amortised cost using the effective interest method, less provision for impairment. The amount of the provision is the difference between the asset’s carrying amount and the recoverable amount, being the present value of expected cash flows, discounted at the original effective interest rates. The carrying amount of the asset is reduced through the use of an allowance account, and the amount of the loss is recognised in the statement of comprehensive income as an administrative expense. Loans and receivables are non-derivative financial assets with fixed or determinable payments that are not quoted in an active market.

Any amounts owed to suppliers that are immediately paid in cash are not considered to be trade payables, since they are no longer a liability. The balance in the accounts receivable account is comprised of all unpaid receivables. This typically means that the account balance includes unpaid invoice balances from both the current and prior periods. Conversely, the amount of revenue reported in the income statement is only for the current reporting period.

If the company had a 30-day payment policy for its customers, the average accounts receivable turnover shows that on average customers are paying one day late. In other words, if an investor chooses a starting and ending point for calculating the receivables turnover ratio arbitrarily, the ratio may not reflect the company’s effectiveness of issuing and collecting credit.

The company has realized the revenue because it has received the customer’s promise to pay in exchange for the goods. Accounts receivable are amounts that customers owe a company for goods sold and services rendered on account. Accounts receivable refers to the outstanding invoices a company has or the money clients owe the company. The phrase refers to accounts a business has the right to receive because it has delivered a product or service.