As a result, it is very common that the amount of income taxes payable to governments in the near future differs from the income taxes expense reported on a company’s income statement. Once again, remember how income tax payments could be postponed by using accelerated depreciation for tax purposes?

A temporary difference is the difference between the asset or liability provided on the tax return (tax basis) and its carrying (book) amount in the financial statements. This difference will result in a taxable or deductible amount in the future.

Also referred to as taxes payable, this account documents the creation of a liability that is not yet paid to tax authorities. Accounting principles state that companies need to record the creation of the tax expense as it’s incurred, even though the money may not be payable in that same time period. Since income taxes are typically paid on a quarterly basis but reported annually, income taxes payable is classified as a current liability. Companies record both income tax expense and income tax payable in journal entries. For companies that use the cash basis for both financial and tax reporting, income tax expense equals income tax payable, the actual amount of tax to be paid.

Your company reports the expense of $10,000 and denotes $12,000 as tax payable. The financial accounting term income taxes payable is used to describe money owed to government authorities but not yet paid. Income taxes payable appears in the current liabilities section of the company’s balance sheet. The company’s resources (assets) increased because the company received $1,050 of promises (accounts receivable) from customers.

What are some examples of current liabilities?

It is important to note that while the company’s resources increased by $1,050, only $1,000 belongs to the company. The other $50 is owed to the state and, thus, appears as the current liability, sales taxes payable. This $50 is a result of the company acting as a revenue collection agency for the government. 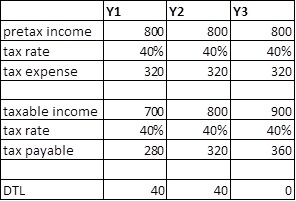 Finally, deferred tax assets (like any other asset) need to be assessed for recoverability. Any amounts not deemed to be recoverable should be written off through expense. The current income tax payable or receivable is recorded with the offset to the P&L (current tax expense). Deferred tax assets and liabilities are normally recorded with the offsetting entry to the P&L (deferred tax expense). U.S. GAAP, specifically ASC Topic 740, Income Taxes, requires income taxes to be accounted for by the asset/liability method.

Income taxes payable are liabilities resulting from companies having more revenues than expenses. In addition to federal income taxes, many states also levy income taxes, although the rates vary from state to state. The actual income tax rates, both federal and state, are determined by tax authorities and are provided to companies for their use. Because the rates may change and their application can be quite complicated, companies use tax experts to calculate the amount of the taxes.

The company’s liabilities increased because $50 of the accounts receivable do not belong to the company, but are owed to the state government. The company’s stockholders’ equity increased by the $1,000 generated by management (sales).

For example, as discussed in Chapter 9, a company might use straight-line depreciation in its accounting system and accelerated depreciation for tax purposes. The company’s resources do not change because the taxes will be paid according to government tax payment schedules. Its liabilities increase because the company owes the government $1,400,000.

How Do Accounts Payable Show on the Balance Sheet?

The situation is further complicated by the fact that the accounting methods used for tax purposes may differ from the methods used in the preparation of financial statements. Remember FIFO and LIFO inventory methods from Chapter 8 and straight-line and accelerated depreciation from Chapter 9? In general, for tax purposes, income taxes to governments are determined according to governmental tax rules, while for financial statement purposes, income taxes are based on taxable income.